If the sacrifices of Michael Brown, Walter Scott and others to come wake us to the nature of the thin blue line that the economic oligarchy has established to keep us gasping in the context of fear and chaos, then their entire edifice could begin to crumble.

We can choose a meaning for their lives and deaths: a wake-up call from the fear that dominates our political culture. Why is a black man 21 times more likely to be shot by a cop than white man? Why is it “normal” for a mother of a two-year-old to take her loaded handgun on a Christmas shopping trip? What is the feeling behind needing to own a weapon whose purpose is to kill people? (I’m not talking about hunting rifles.)

In Errol Morris’s 1988 documentary about a trial (and wrongful conviction) for the murder of a Dallas police officer, the judge recounts the prosecutor’s argument that the “thin blue line” (cops) “separate[s] the public from anarchy.” We can be safe if we build a thick enough line. It is a belief that We the People have long held.

What industries profit from that belief? Start small and expand:

That’s a fair portion of our GDP dedicated to “keeping us safe,” as politicians describe it. Our fear, heightened by 9/11, has us in the grip of authority. But it isn’t enough that the white hats are watching out for us, we need private security too. 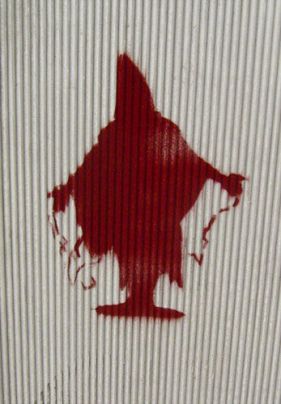 Lately, however, as a part of the surveillance state, we’re seeing holes in our security blanket. We are all journalists, camera-ready to capture a different reality. At Abu Ghraib our soldiers loosened our certainty. Bystanders videoed multiple angles of the choking of Eric Garner on Staten Island. A stationary video shows Tamir Rice falling in a Cleveland park. This month another witness with a camera captured a North Charleston policeman executing and then attempting to frame Walter Scott. Just about every day since, the media publish a story, often with video, providing evidence of police brutality.

Cops are rarely indicted, as we have heard since the Brown and Garner grand juries dissolved. We give the police the benefit of the doubt. Or we did.

In a Washington Post column, photo journalist and war correspondent Ron Haviv asks: “Does the volume of imagery take us to another level of numbness or fatigue, or will it increase the urgency to respond to what we see?”

I sense a growing urgency. Protest in Ferguson led to a federal investigation, the resignation of high-ranking civilian and police officials, and after last week’s elections a more colorful city council. Video and the experience of Ferguson led North Charleston officials to charge Officer Michael Slager (but not his partner, who appeared to be an accessory to evidence tampering).

The bigger question is whether all the evidence of misconduct will shift our culture’s view of the police: that they are no less likely to lie and distort than anyone else who has something at stake in a courtroom, and with their badge perhaps more at stake. If police officers say they fear for their lives as the routine justification for firing their weapons, as Ferguson Officer Darren Wilson testified, are they in the wrong line of work?

What if we reevaluate the nature of the thin blue line? What if we decided that the line is about keeping certain populations in check? What if we saw that we all are part of the chaos we have created? What if we understood that we are inseparable, caught in an inescapable network of mutuality, that people are people and that in the moment any one of us, even a cop, may lose perspective and act beyond comprehension?

Does our fear create chaos, or does the perceived chaos instill fear? If the answer is the former, then what’s the point of all that security spending? And if we decide, “No point,” then what do we do about that edifice?